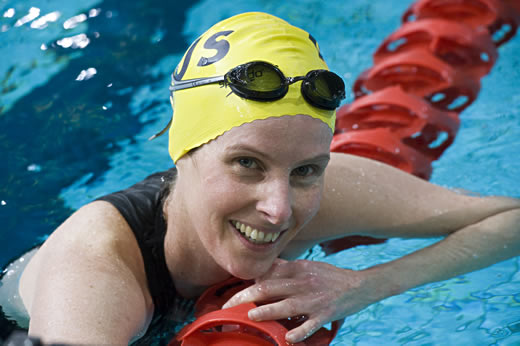 Arrow director and past bone marrow transplant recipient, Lisa Cuthbertson, returned from the World Transplant Games with a tally of 4 gold and 2 bronze medals, also surviving a protest against her zippered ‘Thorpedo suit’. She’s since bought a new one!

Whether from Iceland or Italy, Canada or Kenya, one thing unites participants at the World Transplant Games; an overarching appreciation of life. While a celebration of like-minds, the event is also, and just as importantly, a unique opportunity to advance the cause of organ donation. And the 19th World Transplant Games held in Durbin, South Africa, 28 July – 4 August 2013 was no exception. Over 1200 transplant recipients from 48 countries were running, jumping swimming and of course, dancing up an African storm at the social events.

Australia was represented by a team of 38 transplant recipients, three of whom were bone marrow. These were my 10th World Summer Games and I’ve also gone downhill – albeit in a good way – at four World Winter Games. This special event of competition and camaraderie gives one perspective, brings out a positive sense of play, ignites one’s passion and is a privilege to attend. I’d encourage anyone with a bone marrow transplant and an interest in sport to consider participating. Seeing this many athletes competing – often at a very competitive level – impresses upon one the exceptional contribution of the medical profession, and I’d like to take this opportunity to say thank you to the members of the St Vincent’s Hospital team, who ensured, some 28 years post bone marrow transplant, that I am alive and kicking – literally – in the pool!