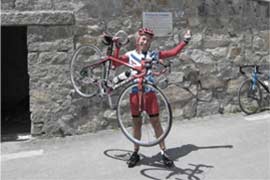 In February 2012, I started getting difficulties. Nothing terribly sinister: tiredness from time to time, mouth ulcers and then the most painful thing of all for a keen cyclist – a boil on the backside.

Finally in late March I had a blood test and was in St Vincent’s Hospital the next day, getting chemotherapy for AML. Of course, what one goes through from being healthy but a bit under the weather one day , to finding out that you’re in a life-threatening condition the next is a huge shock. There’s so much to adjust to as well as all of the medical activity taking place.

The state of my health at the time was dire. Perhaps it had been masked by being fit, but my white blood count at diagnosis was over 300, which, by leukaemia standards, is pretty high. All of the other indicators of a good prognosis were not encouraging. However, the thing that I was told was strongly in my favour was that I was very fit. I got fit from cycling.

It was only two or three days into my treatment that I said to my wife that I intended to get better. And when I got better, I would ride my bike up the Col Du Tourmalet in the Pyrenees, a tall very steep mountain. I had done it twice before some years earlier.

I was in hospital for chemotherapy for close to 4 weeks, waiting until the sought after neutrophils reappeared. Then the magic news of being in remission. Two rounds of chemotherapy, and I managed to have a couple of holidays and get back on the bike in a tentative wobbly way. Then a third round of intensive chemotherapy, at 10 times the rate of the first one. In the meantime there was much debate about whether I should try to have a transplant or not. Initially the doctors could not say that the benefits would outweigh the risks, because of my circumstances. But the recommendation was finally made & the team (my wife, my son and me) decided to try for a match.

I remember going to the transplant information session and there were a few people there who had had transplants. I had never seen a transplant patient before. It was some relief that they all looked well and were engaged in life, travel, exercise and work.

On holiday in early 2013 I started to lose my hearing, soon losing it completely in one ear. The cause was tracked down to be a tumour. It wasn’t a huge surprise, because of post BMT monitoring results, to be diagnosed with Lymphoma (Post Transplant Lymphatic Disorder). It was also an extremely distressing extra blow.

I had participated in a clinical trial during my transplant, the treatment was intended to minimise the risk of GVHD. One of the risks of the trial was Lymphoma. It was a very low risk, but I was on the wrong side of the risk.

The treatment, monoclonal antibodies, progressively reduced the size of the tumours and eventually I was Lymphoma free. Interwoven in the tale were the usual other unexpected problems, especially some distinctly unpleasant stomach ulcers requiring hospitalisation.

I am now in the mild GVHD stage which is a huge balancing act at the best of times but of raised focus because of the risk of Lymphoma returning with my immune system suppressed.

Despite the dramas we managed two overseas holidays in 2013. France in June was a particularly special occasion because my son, Oliver, had just completed his PhD in chemistry in France. It just so happens that the work that he focuses on is cancer related. In France, the presentation (“defence”) of a PhD is a public event complete with professorial interrogation. The prospect of missing it was especially distressing. The joy of being Lymphoma free was probably exceeded by the wonderful pleasure of seeing him be awarded his PhD with great accolades.Oliver now does post-doctoral work which continues to have fascinating possibilities in cancer treatment.

I got back on the bike whenever I could between and after treatments because the thing that stuck in my mind was being fit was so much in my favour. I also love just doing it. Being ABLE to do it, feeling so alive.

I was cautious riding during the time I had Lymphoma but eventually was doing 80km on Sundays. For many years a friend and I had gone down to Melbourne each year for a 210km cycling event called Around the Bay. My preparation used to take months, but I didn’t have those months. I had decided that I wasn’t going to do the whole distance, but I wanted to do something. So we went down and I did 150km which I’m delighted about. That was very encouraging.