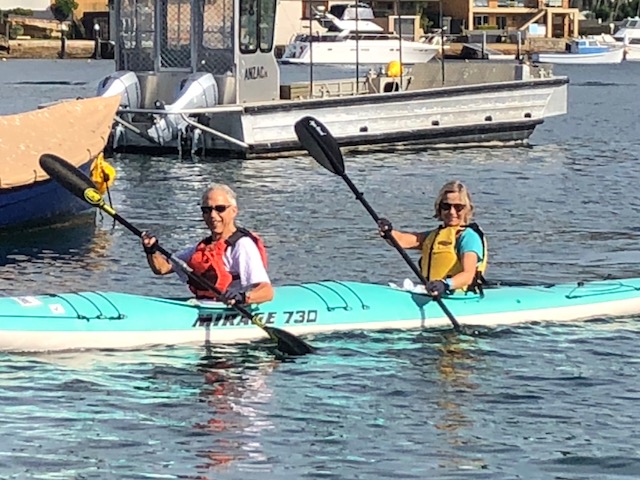 At Arrow’s 30th anniversary celebration last year Paul Seshold made a successful bid for a silent auction prize to spend the morning paddling around the Port Hacking River with Arrow Chairman Mark O’Hara.

On Saturday 24 February, almost 4 years since Paul and his wife Elizabeth cycled the Col du Tourmalet to raise $150,000 for Arrow, they joined Mark on a paddle that took them from Burraneer Bay past Lilli Pilli Point and across to the edge of Royal National Park from Deer Park to Lightning Point.

The weather was perfect with slight cloud cover creating a warm morning and only a gentle breeze to ruffle the water. After spending 2 ½ hours paddling they then joined Mark’s wife Sue for a gourmet breakfast which Sue prepared and served on a balcony overlooking the picturesque Burraneer Bay.

Paul later thanked Mark and Sue saying, “Thank you very much for the outing and breaky yesterday. We both enjoyed it very much. Great to kayak in a new area!”

We would like to thank Paul and Elizabeth for their continued support of Arrow and their generous contribution to our fundraising.