A brush with Dr Kerry Atkinson 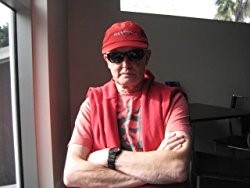 With a 50% chance of survival in the first six months after the transplant, at the age of 16, Lisa Cuthbertson could barely have imagined, 36 years laters, she’d be interviewing the very doctor who looked after her. But she did know she was at one of the world’s best hospitals for bone marrow transplantation, with one of the very best doctors by her side.

Lisa: You joined St Vincent’s Hospital in the early 1980s: what was happening in bone marrow transplantation?

Kerry: The first bone marrow transplants in Australia were done by Professor Jim Biggs at St Vincent’s Hospital in Sydney. When I joined the Department in 1981, Jim had already done six transplants. He took me on to help expand and grow the program, which we did.

Lisa: What changes/advances in treatment have been made since then?

Kerry: There have been many improvements in BMT over the last 20 years. One of the biggest
innovations is the use of mobilised peripheral blood stem cells instead of bone marrow as the source of stem cells for the transplant.

It was discovered that giving the donor a protein called G-CSF (granulocyte colony-stimulating factor, which occurs normally in the body) had two effects: it increased the number of neutrophils in the blood (the white cells that fight bacterial and fungal infections) and it cleaved the bonds that keep marrow stem cells in the bone marrow and they poured out into the bloodstream. There they could be collected in huge numbers by using a cell separator machine.

In this process, a needle is put into a vein on one arm of the donor which takes the blood to the machine where the blood is centrifuged and separated into its component parts — plasma and platelets, white blood cells and red blood cells. The machine can be programmed to syphon off any of these components: in the case of peripheral blood stem cells, the white cell layer is collected and the rest of the blood is returned to the donor through a needle in the other arm.

Lisa: What does this mean for the patient?

Kerry: The advantage of this to the recipient is that engraftment of the donor stem cells is much more rapid because of the increased number of marrow stem cells collected. The advantage to the donor is that there is no need for a general anaesthetic and they do not have the postoperative pain which results from multiple needle aspirations from the pelvis during a bone marrow harvest.

This technique is now widely used for people having a transplant for malignant disease such as leukemia, because the T cells in the peripheral blood infusion still recognise the recipient as having different minor tissue antigen differences [although donor and recipient are usually matched for
major (HLA) tissue antigens]. T cells then cause graft-versus-host disease (GVHD) in the recipient’s normal tissues, especially the skin, gut and liver, but they also attack any residual malignant cells not destroyed by the pre-transplant chemotherapy/total body irradiation.

This graft-versus-leukemia effect is a very important component of the cure for people transplanted for malignant disease but it is irrelevant for people undergoing a transplant for a serious but
non-malignant disease such as severe aplastic anaemia. For such people, marrow is the preferred source of haematopoietic stem cells, since it has many fewer T cells than mobilised peripheral blood and thus causes less GVHD.

Lisa:  I say I glow in the dark having had total body irradiation. All jokes aside, is the pre-transplant treatment still as debilitating?

Kerry: A second major innovation is the use of reduced intensity conditioning regimens before the transplant. For example, it is possible to give a person aged 70 or so [beyond the normal age range for conventional high-dose chemotherapy/total body irradiation (TBI)] a much lower dose of chemotherapy or radiation. Thus they can receive one dose of TBI, followed by five days of immunosuppressive tablets — all as an outpatient, prior to receiving the stem cell infusion from their donor, also as an outpatient. The idea is to make the T cells present in the donor marrow do most of the work by recognising any residual leukemia cells as foreign and eradicating them. This is not usually used for people with advanced leukemia, who are still usually given high-dose conditioning treatment pre-transplant.

There have also been a number of new antibiotic, antiviral and anti-fungal drugs introduced, which have improved the ability to treat infections, a common event post-transplant because of the slow recovery of the immune system post-transplant.

All these innovations have made the transplant process easier. However, there is still the risk of recurrence of the underlying illness post-transplant, which can be difficult to treat. One ray of light is on the horizon. Recently it was reported that one particular type of acute leukemia could be treated successfully with a combination of monoclonal antibodies — so I think this is where the future may go. Monoclonal antibodies are antibodies made in a medical laboratory that are specific for one protein or part of a protein. The technique of making them was described in 1975. They are becoming more and more involved in medicine today, especially in oncology. They are sometimes described as  targeted biological therapeutic agents.

Lisa: What would you like to see happen in bone marrow transplant research and/or treatment in the future?

Kerry: A much easier process, as indicated above, using monoclonal antibodies or other new targeted biological therapeutics. I think things have improved a lot, but there are still issues to work through, such as preventing recurrence of the underlying disease after, and in spite of, the
transplant.

Lisa: What is your favourite achievement both personally and professionally?

Personally, my best decision by far was to ask Pauline if she would marry me. After that, I feel very lucky to have enjoyed the plays and novels of Samuel Beckett, some classic Ferraris, the songs of Bob Dylan, Picasso’s ceramics and the paintings of Francis Bacon.

Lisa: Describe a memorable moment from your time working at St Vincent’s Hospital.

Kerry: Well, this is a BMT in-joke. People who have a bone marrow transplant receive the marrow which provides them their resulting blood and immune system cells for life. So if a male recipient receives marrow from a female donor and has his blood chromosomes examined 60 years later, he will have two XX chromosomes — classical for females. BMT recipients are thus chimeras — they have tissues from two different sources.

In ancient mythology a chimera was an animal with a lion’s head, a goat’s body, and a serpent’s tail. In the Department of Haematology I worked alongside another consultant Alan Concannon. The team used to have a Friday evening beer at the end of the day each week and Alan told us he had just bought a new car — it was a Holden Chimera. It was not a very good model but I don’t think Alan realised the association.

Lisa: You’ve published 240 peer-reviewed papers in the marrow transplant and stem cell literature, 84 book chapters and 20 invited reviews. In 2020 you authored eight books. Tell us about these.

Kerry: To keep my medical licence I have to prove that I have done 100 hours each year of medical education, so I started last year on a series of books entitled, for example, Rheumatoid arthritis: Targeted Biological Treatments. I only include treatments approved for therapeutic use by the USA Food and Drug Administration.

Over the last six decades scientists have unravelled the precise workings of both normal cells and malignant cells: once you know how a given cell works, you have a drug target and can design a specific treatment to counter a specific process. This has led to a huge number of new drugs. As an example, when I finished medical oncology training in 1976, there were two drugs approved for lung cancer. Now there are over 100.

Kerry: Ah yes, birds: I got interested in birds when my Dad got fed up with my asking him questions when he was up a ladder painting the window frames on our house in Tonbridge. He suggested I go and explore some marshy fields down the road from our house. There I saw a small bird with a red front like a Chaffinch but a black head like a Great Tit. I told him what I had seen and he told me it was a Bullfinch: I was hooked.

The great thing about bird-watching is that birds are usually easy to see, so you get to go all over the UK, Europe, the USA, Africa, Asia and Australia to places that you would otherwise not go to. It also teaches you pattern recognition.

You’ve switched from a stethoscope to a paint brush. Tell us about your new-found passion.

Kerry: Actually, I still have a very small clinical practice in Sydney, but you are correct that I spend a lot of time painting. I never thought I had a creative bone in my body, although I could do non-fiction stuff; perhaps I inherited this from my Dad. Anyway, I was talking to a friend of 30 years and he told me that he and his wife were going to sell their oyster farm on the south coast of NSW. I asked him what he was going to do because he had always been so active. He replied that he was going to go back to his favourite pastimes — drawing and photography. So I wondered: could I do something artistic? Finally I discovered acrylic paint and canvas and I concentrated on painting, in a fairly abstract style —dawn scapes, birds, tree trunks (yes, really) and recently butterflies.

I get huge satisfaction when I have completed a painting and I love them dearly and refuse to sell them. The rest of my family hate them so they are kept in a small room downstairs with the blinds down and the door shut. My only encouragement is that my nephew, Scott Atkinson, who lives with his family in the UK likes them, and he was an art teacher for 30 years.

Lisa: I like your dawn scapes but not the idea of getting up to paint them. Describe your favourite part of dawn in three words.

Kerry: Get the correct evidence-based information on survival and side-effects of both chemotherapy and BMT. Make your decision about which option to take based on facts. Remember there are large numbers of new drugs becoming available. The poster child for these new drugs is imatinib (Gleevic or Gleevec), depending on which country you are in). Before imatinib BMT was the only curative option for chronic myeloid leukemia. This has changed dramatically with the availability of imatinib and its second generation successors.

Lisa: Let’s needle in on you now: what is your life motto?

Kerry: Good health is number 1. After that, a code of moral integrity. After that, tertiary
education. I never believed in good luck or bad luck but I read a good definition of good luck recently: opportunity preceded by information.

Apart from that, be nice to people but be firm. If you have an issue with something address it proactively.

Lisa: And finally, knowing your new-found passion for painting, if your life were a painting what would it be called and why?

Note all information contained in this article is considered personal in nature and is not sanctioned by Arrow or St Vincent’s Hospital. You should always seek your own medical advice in relation to your individual circumstances.