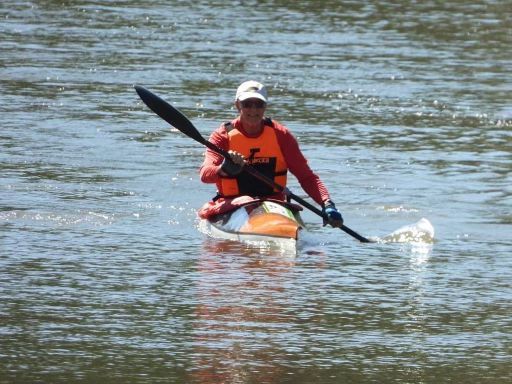 That’s an apt description for Wennie van Lint. He has been an academic (Head of Department, no less), has had a football career including a couple of games with South Melbourne (now known as Sydney Swans) and is currently a Leader in finance and economics with GHD Advisory.

And what does that have to do with Bone Marrow Transplants?

Nothing. But there’s a knee injury lurking in the story and that has in fact been incredibly beneficial to us here at Arrow Bone Marrow Transplant Foundation.

Wennie had the misfortune of coming down in a ruck scrum with his knee behind his head. Ouch. After continuing to coach and play, his knee deteriorated, and he had to move on from football.

What does a footballer do when faced with a career-ending knee injury? He finds other sporting pursuits that don’t place sideways forces on the knee. In Wennie’s case those sports are swimming, cycling. And, fortunately for us, paddling.

One day, while paddling on the Yarra River in what Wennie describes as “a very ordinary boat”, he got into a conversation with two paddlers from the Fairfield Canoe Club, and he’s been a member there ever since.

Of course, high-achieving Wennie wasn’t about to set out for just a bit of a paddle with his kids and a picnic basket stashed on board. No. He took paddling to the highest degree, ending up at board level initially with Canoeing Australia, and then as the president of Paddle Victoria. He’s committed to the sport on the water as well, with several major events under his belt, including both the Massive Murray Paddle and the Hawkesbury Canoe Classic (HCC).

It was through his first Hawkesbury Classic that Wennie became aware of the work of Arrow Bone Marrow Transplant Foundation. “I think the work you do supporting research into Bone Marrow Transplants is really worthwhile,” says Wennie. “I used to be an academic, so I value the role research has in improving the current state of things, and I’m thrilled to think that I can play some small part in supporting that.”

But it’s no small part that Wennie is playing. Over the years Wennie has raised $13,599 for Arrow through his participation in paddling events, helping medical researchers improve bone marrow transplant patient outcomes.

Unfortunately for the last three years running the Hawkesbury Canoe Classic has been cancelled (two due to COVID and this year because of dangerous conditions due to the recent floods). Despite these cancellations, Wennie has continued to support the work of Arrow: he set up a MyCause page, where his friends, family, and sporting and work colleagues have sponsored him to continue his paddling.

When we spoke, Wennie was less than $200 away from doubling his initial target of raising $3000 for Arrow from his latest paddling adventure. I mentioned this during our conversation and thanked him for his incredible efforts. Wennie’s response? “I’d better make it $20,000.”

Wennie is definitely a high achiever. “There’s at least one more Murray Marathon/Hawkesbury Classic left in these arms,” he said.

If you’d like to help Wennie kick his $20 000 goal through the posts, you can donate to his page here .